for an archive of earlier work get in touch
Ocean Living 2013
Ocean Living was a book and a show made with Megan Rooney at Arcadia Missa, London
September 2013

The Skyscraper in the Sea, A playlist of all the episodes

An excerpt from the book Ocean Living that you can currently buy here:
Arcadia Missa Publications 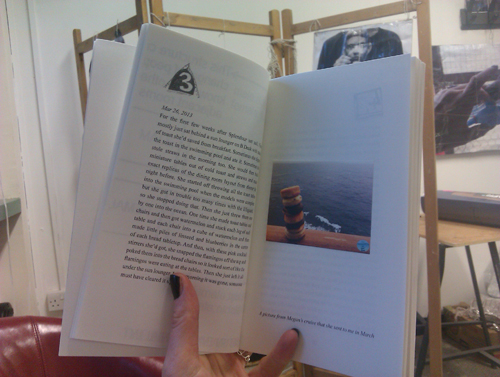 When the fast food place opened some passengers got sort of annoyed, they thought it was kind of vulgar, but it was really popular. It opened down the corridor from Treatment Rooms 2, in what had previously been a staff common room. The place originally opened when someone found some frozen burgers and decided to make a special fast food party, but it turned into a daily fast food event. The real burgers didn’t last for long, soon the fast food place was making burgers out of whatever food was going, usually vegetables...after a while a burger counted as someone’s daily food ration.

But most people didn’t go there for the food, they just went there because they didn’t know what else to do sometimes, or for other reasons.

The three people who built it wanted to make somewhere really authentic. They took all their favourite bits from fast food restaurants they could remember and decorated the place like that. There was still paint on board and they covered everything in the room in either red or yellow, no other colours were allowed. This already made it look pretty authentic. The chairs were cushioned desk chairs, they had previously been shades of blue, but those were painted red or yellow, and for tables there were cardboard boxes, painted. Hundreds of crowns were made out of tinfoil and stacked around the restaurant. When people arrived they could put one on, but they weren’t allowed to leave with them because there wasn’t an unlimited amount, and usually the same people visited each day. One day the customers painted red and yellow patterns on all the crowns and they looked even more authentic. Nothing was for sale, and there was only burgers to eat, but for authenticity, the people who ran the place painted a menu and price list on the wall. It had pictures of the food they wish they sold, like milkshakes and salads and hash browns, and prices were listed in various currencies.